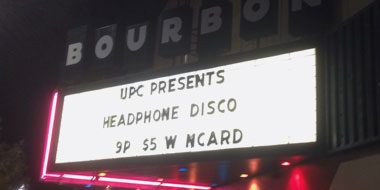 Headphone Disco has enjoyed it’s busiest summer yet with some truly exceptional shows. We’ve re-visited old friends; performing at Belladrum Festival for the 6th year in a row. We’ve made some new friends; hello End Of The Road Festival, hello Lushfest! We’ve played in 28 US states since April (and Alaska can get crossed off the list in Feb 2013!!!). We’ve sold out the o2 Academy in Sheffield for the 4th year in a row at our annual self-promoted Freshers hoedown. And along the way we’ve staged the world’s biggest ever Headphone Disco on the opening night of Creamfields UK for 16,000 people across four arenas (and watch out, next year the capacity is gonna be even bigger). Our DJ family has expanded significantly as we continue to develop the concept and spread the love to new and exciting locations and we’ve had a lot of fun continually tweaking and adapting our show to ensure maximum excitement for any newcomers to the concept and some unexpected twists for any regular fans of the HD show.

If you like the sound of this and you’d like to be involved in Headphone Disco then get in touch and tell us what you’re good at. We’re always looking for people that are good at stuff…..